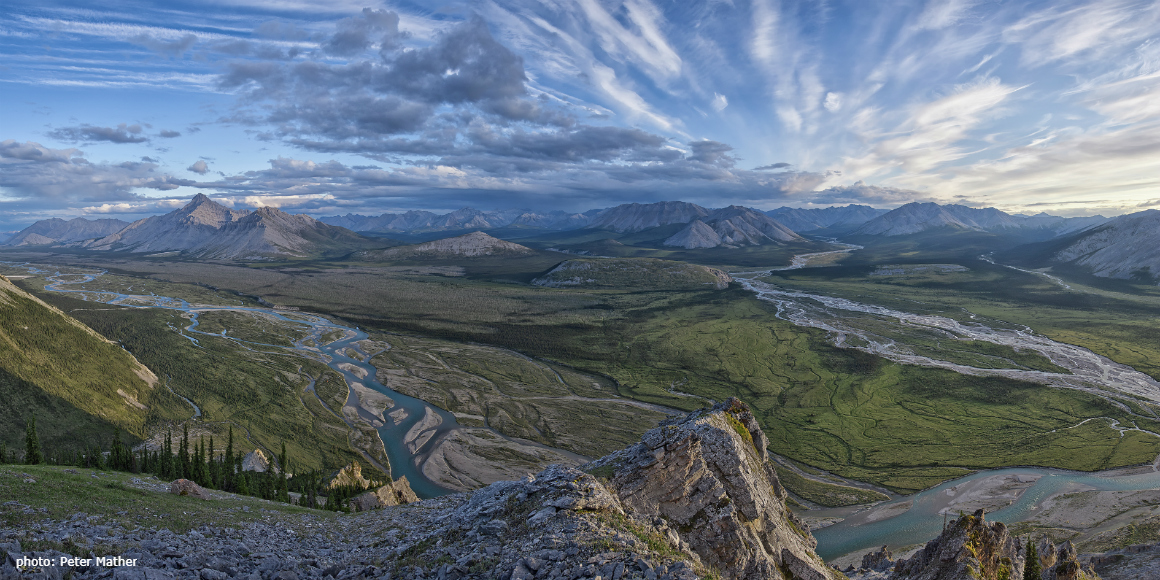 CPAWS has accomplished a lot over the past 50+ years and has played a pivotal role in strengthening Canadians’ relationship with our natural environment. Below is just a sampling of the successes that have brought us to where we are today.

As a conservation organization, CPAWS acknowledges that our past, and the present, are rooted in the norms and customs of the European colonization of Canada. We recognize that we are in the early stages of an important journey of reconciliation, and we must evolve as we learn. We also acknowledge that it will not be up to non-Indigenous Canadians to determine if our actions are effective. As we work toward achieving the protection of Canada’s diverse ecosystems, CPAWS is committed to doing so in the spirit of truth and reconciliation, recognizing the essential leadership of the Indigenous stewards who have cared for these lands and waters since time immemorial. We are committed to being true partners and we recognize that it is our responsibility to support Indigenous Peoples to safeguard land and water for future generations and advance shared conservation priorities based on relationships, respect, and reciprocity.

As the world continued to cope with the implications of a global pandemic and other disruptions, the commitment to conservation in Canada held steady.

In April 2021, in advance of the federal budget, the British Columbia government announced an $80 million investment in BC’s provincial parks over the next three years; this historic budget increase was decades overdue and the result of much campaigning by CPAWS BC and other BC nature-focused organizations.

A mere few days later, we saw the largest Canadian investment ever in nature, as the Federal Budget included an unprecedented $3.2 billion for nature protection, demonstrating a solid commitment towards addressing the intertwined biodiversity and climate change crises. This monumental investment included $976.8 million over 5 years specifically to protect Canada’s ocean and $2.3 billion to protect land and freshwater, focused on implementing Canada’s commitment to protect 30% of land and ocean by 2030. This historic investment also signaled a focus on reconciliation by supporting Indigenous Guardians and the development of Indigenous Protected and Conserved Areas.

The good news continued through the spring when SNAP Québec’s advocacy efforts paid off as Québec pledged to protect 30% of its landmass by 2030. And CPAWS Nova Scotia was also celebrating its success when the Nova Scotia government announced its intention to establish 61 new protected areas across the province. And finally, after 101 months of delay, the federal Minister of Fisheries, Oceans, and the Canadian Coast Guard and the federal Minister of Environment and Climate Change signed a ministerial order enforcing the prohibition to destroy the critical habitat of the copper redhorse under the Species at Risk Act.

On the heels of ensuring the habitat of one small species of fish remains untouched, the Government of Canada presented a firm stance on the future of thermal coal mining projects and project expansions: they do not align with Canada’s domestic and international climate change commitments. The statement came as a clear indication that Canada is committed to being an international leader on climate action and biodiversity.

This commitment was reaffirmed as Canada joined other G7 countries in approving a Nature Compact to halt and reverse biodiversity loss by The Leaders also committed to implementing these targets at the national level, recognizing Indigenous Peoples as full partners.

Shortly thereafter, CPAWS celebrated the declaration by long-time partners, the Cumberland House Cree Nation, of the environmental and economic jurisdiction and protection of Kitaskīnaw as a first step in the Indigenous-led protection of the Saskatchewan River Delta.

In the 48 hours that followed, we celebrated as an Alberta Joint Review Panel responded to almost 5,000 letters from CPAWS supporters by denying Benga Mining Ltd’s application for the Grassy Mountain Coal Project under the Coal Conservation Act. Subsequently they also denied all of Benga’s other related applications under the Environmental Protection and Enhancement Act, the Water Act, and the Public Lands Act.

In the spring, we released The Grades Are In: A Report Card on Canada’s Progress in Protecting its Land and Ocean. In it, we evaluated efforts to create protected areas over the past decade by Canada’s current federal, provincial, and territorial governments, and assigned each jurisdiction a grade based on their contributions and shortcomings. The goal of this inaugural Report Card was to learn from the successes and failures of the past to guide effective conservation into the future.

In the fall, we were elated to see the approval of Motion 101 by an overwhelming majority of country and nongovernmental organization delegates at the International Union for Conservation of Nature (IUCN)’s Conservation Congress. This motion, co-sponsored and authored by CPAWS, recognizes the need to conserve at least half the planet to successfully tackle the biodiversity and climate crises. It also highlights the critical importance of engaging with Indigenous Peoples and respecting Indigenous rights in all conservation activities and supports a target of protecting at least 30% of land and ocean by 2030 in the Post-2020 Global Biodiversity Framework.

Following much campaigning, CPAWS celebrated good news for Alberta’s caribou when Parks Canada made an evidence-based and precautionary decision to extend the backcountry access closures for the entire snow season in Jasper’s Tonquin and Brazeau caribou ranges, where caribou are on the brink of extirpation.

The good news continued to flow as the Government of Québec awarded $3.3M to SNAP Québec to support their conservation initiative in collaboration with municipalities to establish protected areas and conservation corridors which will help to strengthen the representative character of the protected areas network, particularly in southern Québec, where biodiversity is the richest and most threatened.

Progress on terrestrial campaigns drew our focus to marine conservation which proved to need greater bolstering. In our report, The MPA Monitor, we provided a first-of-its-kind assessment of the quality of Canada’s federal Marine Protected Areas (MPAs), and we discovered that half the area Canada is counting towards its marine protection targets is, in fact, weakly protected. This study made CPAWS the first organization to assess Canada’s federal MPAs against both The MPA Guide, which was developed by and international team of experts, and Canada’s minimum protection standards.

Following the September federal election, we commended the government’s renewed promise to protect 30 percent of land and ocean and to halt and reverse biodiversity loss by 2030, partnering with Indigenous Peoples and respecting traditional knowledge. This reaffirmed Canada’s strong commitment to address the interconnected crises of climate change and biodiversity loss.

This promise to work in partnership with Indigenous Peoples was reinforced in early 2022, when the Government of Alberta designated the expansion of the Kitaskino Nuwenëné Wildland Park in northern Alberta. The largest protection of boreal forest in the world could not have been possible without the leadership of CPAWS Northern Alberta’s long-time partner the Mikisew Cree First Nation, who identified this area for conservation and worked collaboratively with industry and the provincial government since 2016.

This year has proven to be a time of reaffirmed commitment to collaboration and progress that we have great hopes will continue as we work to help Canada meet its commitment to protect 30% of land and water across the country by 2030.

Thank you for all you have done in support of this decade of conservation.

High-quality permanent protection is possible with investment and political will

This was a year driven by hope. A hope for collaboration, for investment, and for progress as Canada’s reputation as a conservation leader was on the line.

When we released our Report Card in the spring of 2021, it was clear that a lack of provincial and territorial government commitment and action were major obstacles to Canada’s failed effort to protect 17% of land and inland water by its 2020 deadline. Yet, we remained optimistic as Canada joined the Leaders’ Pledge for Nature and committed to protect 30% of land and ocean by 2030. This promise, coupled with an historic budget investment of $3.2 billion for nature protection, signalled Canada was ready to rise to a new challenge.

As the year wore on, we saw provinces take steps to better protect caribou and invest in the establishment of conservation corridors. We celebrated the declaration of environmental and economic jurisdiction and protection of the Saskatchewan River Delta by the Cumberland House Cree Nation. We welcomed the largest protection of boreal forest in the world for which the Mikisew Cree Nation worked collaboratively with industry and the provincial government to achieve. Before the year was over, we saw a network for protected areas in Southern Quebec gain ground.

CPAWS has always been focused on knowledge-based advocacy, public education, and engagement, that are underpinned by collaboration and partnership. We are confident that when the provinces and territories support Indigenous leadership and work in partnership with one another and the federal government, we will see progress. We know the establishment of high-quality permanent conservation protection is possible with sustained investment, political will and cooperation.

The science is clear. Protecting land and ocean is vital to a world at risk of collapse from the twin crises of climate change and biodiversity loss. Both of these global catastrophes need Canada’s leadership. CPAWS remains as committed as ever to helping our country lead by example by delivering on its international commitment to protect 30% of land and water in Canada. We can show the world that hope is in our nature.

Laura Colella
Chair and President, Board of Trustees

Again, this year, the CPAWS team demonstrated adaptability while working-from-home and identifying new funding avenues to bolster the ongoing generous support of our donors against pandemic-related financial uncertainty. The support from our donors barely wavered, as they provided to CPAWS $11,717,962 in funding allowing us to focus 73% of our spending exclusively on conservation. Our partners and stakeholders can be confident CPAWS remains financially stable and focused on our conservation mission.

This revision has no impact on net revenue nor net assets. However, for year ended March 31, 2021, both revenue and expenses were reduced by $1,780,986. Our spending exclusively on conservation programs was also reduced to 75% (from 79% as reported in 2021 Impact Report).

Thank you to those individuals, foundations, corporate donors, corporate partners, and organizations that demonstrated their leadership in our 2021-2022 fiscal year with gifts and contributions to CPAWS of $1,000 or more.

Hugh Richter and Gillian A. Holland

Catherine A. and Robert Shields

Department of Fisheries and Oceans

MEC Endowment Fund for the Environment